The other day I was troubleshooting 100%  CPU utilization on a SQL Server 2008 database server. The server had 100 or so databases of varying sizes however none were larger than a few hundred MB and each database had a corresponding web site on a separate web server.  Since the server hosted quite a few databases the high CPU needed to be resolved quickly because it was causing issues for everyone.  High CPU on a database server can often be symptomatic of a issues occurring outside the server. In this case the real issue was in fact being caused by a SQL Injection attack on a web server.\r\n

\r\nThe knee jerk reaction when experiencing high CPU may be to stop it immediately either by restarting services or recycling app pools however letting it run temporarily will help you to isolate the cause. SQL Server 2008 has some great built-in reports to help track down CPU utilization. On this occasion I used the Top Queries by Total CPU Time report. You can get to this report by right clicking on the server name in SQL Server Management Studio and then selecting Reports.\r\n\r\n 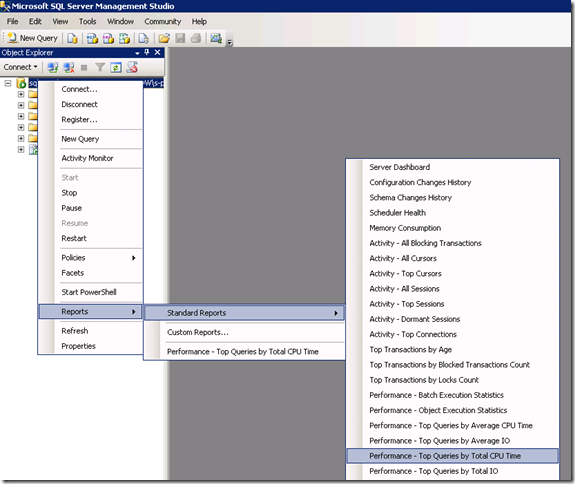 \r\n\r\n \r\n\r\nThe Top Queries by Total CPU Time report will take a few minutes to run. However once it completes it provides a wealth of information. You’ll get a Top 10 report clearly showing which queries and databases are consuming the most CPU on the server at that moment. Using this report I was able to see that one of the databases on the server had 4 different queries running that were contributing to the high CPU. Now I could focus my attention on this 1 problematic database and hopefully resolve the high CPU.\r\n\r\n \r\n\r\n 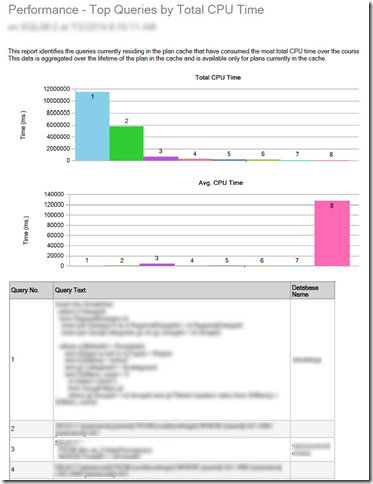 \r\nNow that I knew which database was causing the problems I fired up SQL Profiler for just a few minutes. I wanted to get a better understanding of the activity that was occurring within the database. Looking at the high number of Reads coming from the app named “Internet Information Services” I was starting to realize that web site activity was hitting the database pretty hard. I could also see plaintext  data being inserted into the database and it was clearly spam.\r\n\r\n

\r\n\r\n \r\n\r\nBefore I turned my attention to the web site however I wanted to see if there could be any performance improvement using the Database Engine Tuning Advisor since I had the valuable profiler trace data. The DTA will analyze the database activity and provide a SQL script with optimizations using indexes, partitioning, and indexed views. Usually with DTA I’ll see 5-10 % performance improvement. I was excited to see a 97% improvement!\r\n\r\n

\r\nAfter I applied the optimizations script from the Database Engine Tuning Advisor the CPU utilization on the database server improved considerably. However, I knew the web site was experiencing suspicious activity so I used Log Parser to get some reports from the site’s traffic log. Using the query below I could see the most frequently used querystring values and it was obvious the site experiencing a SQL Injection attack.\r\n

\r\n\r\nWith attacks like this a natural inclination is to start blocking IP addresses. Unfortunately sophisticated attacks will use a variety of IP addresses so as soon as you block a few address malicious requests from new ones will take over. The best solution is to block the malicious requests with Request Filtering so I quickly added a few rules to block keywords I had seen in my log parser reports.\r\n\r\n 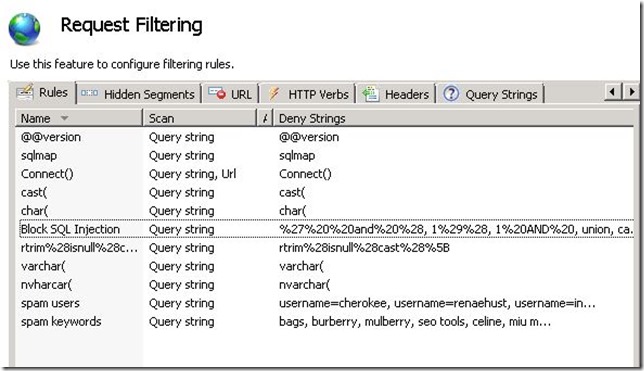 \r\n\r\n \r\n\r\nImplementing the IIS Request Filtering rules stymied the SQL Injection attack. Using the Log Parser query below I could see the http status codes of all the requests hitting the site with the new rules in place.\r\n

\r\n\r\nRequest Filtering uses the http substatus 404.18 when a query string sequence is denied. Looking at Log Parser report below you can see the  50,039 requests were blocked by the new Request Filtering rules.\r\n\r\n 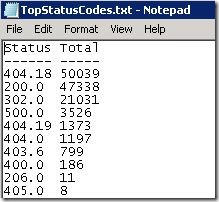 An Once of Prevention…

\r\nThe web site that had been attacked hosted free cooking recipes and allowed visitors to submit their own recipes. Unfortunately the owner’s goodwill was easily exploited because there was no form field validation on site’s submission page and new recipes were automatically being displayed on the site without being approved. This is a dangerous site design and should never have been deployed without basic security measures in place.\r\n\r\nI did a quick select count(*) from the recipe table in the database and was amused by all the delicious recipes I found 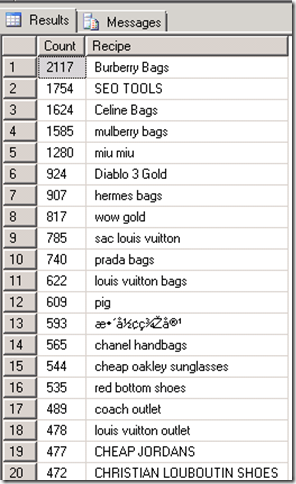