When your Windows server is low on space or runs out of space entirely you need to quickly identify where the disk space is being utilized and free up space. Low disk space or worse yet no disk space can have a negative impact on your server’s performance.  Knowing the paths to a few folders that typically eat up space such as web logs isn’t enough when you need to free up space ‘now’. In this situation you need a graphical tool that can quickly analyze an entire disk drive or even multiple drives and show you how the server’s space is being utilized. Fortunately for Windows server admins JDiskReport and WinDirStat are two such tools and better still they are both free.\r\n\r\n \r\n

\r\nJDiskReport is a free graphical disk space tool from jgoodies.com. Unlike some of those other free tools companies provide that require you to register your product before it works or that you have to pay to unlock features, JDisk is ready to use as soon as it’s installed and it’s feature complete. Installation of JDisk is straight forward and quite simple.\r\n\r\nBefore you install JDisk you should know that it requires the Java Runtime to run. If the Java Runtime is missing and you install JDisk, it prompt you to locate the path to the Java Runtime. Once you’ve downloaded Jdisk to your server just launch the installation wizard. The only additional step of the wizard will be to specify the path where you want it to be installed.\r\n\r\n 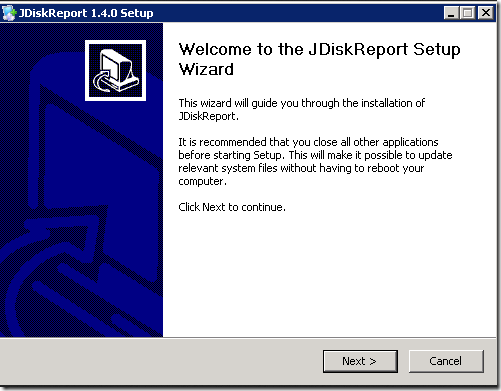 \r\n\r\n \r\n\r\nOnce installation has completed you will be presented with the default starting screen. Any previous paths that you’ve analyzed will be displayed for added convenience. You can select the entire disk drive or a specific folder on the server.\r\n\r\n

\r\n\r\n \r\n\r\nUnless I have a specific folder in mind I typically pick the entire disk drive. Within a few minutes, after initiating a directory scan, you will see a detailed analysis of the server’s disk space utilization. This report is more than just a pretty picture. Not only can you can click on any folder of the navigation tree to drill down more but you can also click on any part of the pie chart to see subdirectories.\r\n\r\n 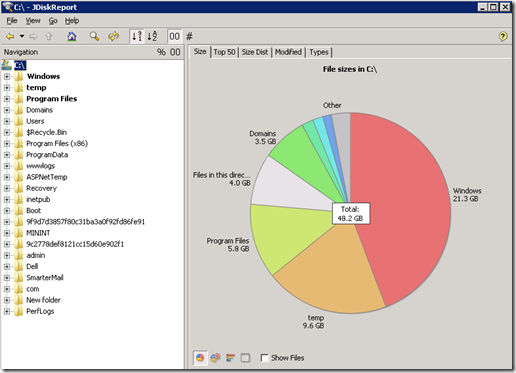 \r\n\r\n \r\n\r\nIn the picture above we can see that the Windows folder is using the most space but that is to be expected on a C: drive. Looking more closely I can see that on this server C:\temp is using over 9 GB and that’s unusual so there’s probably some files in there I can delete which will free up valuable space. In addition to the colorful chart you can also get a detailed file list and sort that according to size. In the picture below we can see a more detailed look at C:\temp.\r\n\r\n 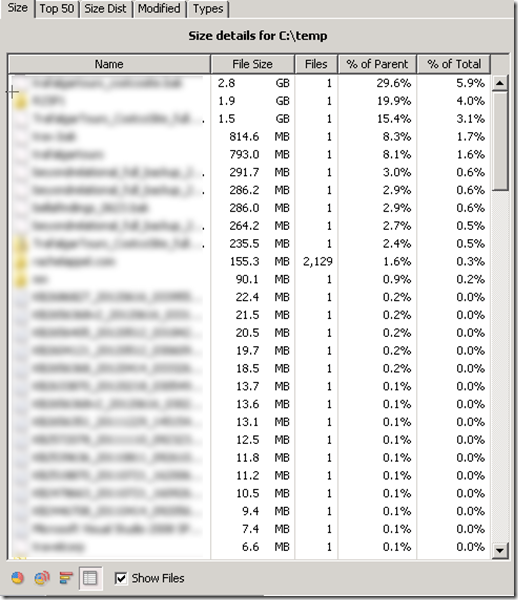 \r\n\r\nWithin minutes of running the scan, JDisk has helped me find several large files which can be deleted.\r\n\r\n \r\n

\r\nWinDirStat can be downloaded from windirstat.info and is available in 12 different languages. It offers some interesting features such as an option to delete files and a color coded treemap  as well as disk space utilization based on file type. Installing WinDirStat is just as simple as installing Jdisk. Upon launching the wizard you’ll be prompted to accept the GNU GPL. After that you just need to choose the features and then pick the installation path.\r\n\r\n

\r\n\r\n \r\n\r\nWhen the program first opens, it will display all of the disk drives available for analysis. If your server happens to have any network drives mapped, they will also be displayed. Here you have the option to scan all the drives on the server, just one drive, or a specific folder.\r\n\r\n 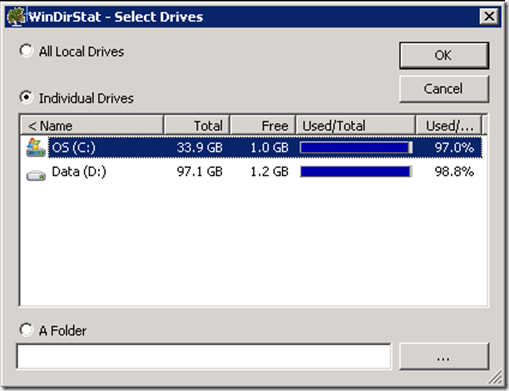 \r\n\r\n \r\n\r\nScanning the disk drive completes quickly however it’s hard to say whether WinDirStat is faster or slower than JDisk. The speed of both programs will ultimately depend on how much data is being analyzed and the server hardware configuration  such as processor speed and disk drive speed. Once it completes you are presented with a detailed analysis of the disk space utilization. Clicking on any folder in the tree view enables you to drill down in the directory tree.\r\n\r\n

\r\n\r\n \r\n\r\nFrom the application menu you can toggle showing the utilization by file type and see the treemap. Although the treemap and file type analysis are helpful, I prefer to just use the directory list because when I’m working on a server that’s running out of disk space, I need to get it resolved quickly.\r\n\r\n 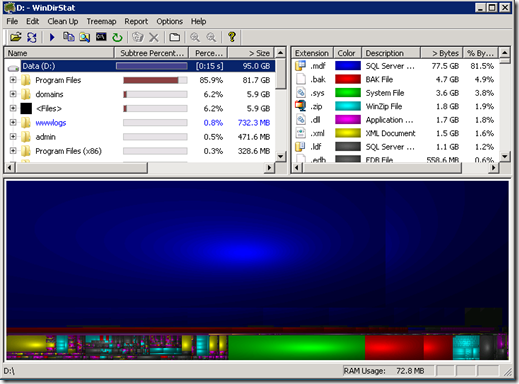 \r\nHaving enough free disk space is a necessity for Windows servers to perform optimally.  Graphical tools like JDiskReport and WinDirStat make it easy to identify where your server’s disk space is being consumed. Both are capable programs and work quickly to analyze disk space utilization. If I had to choose only one, I could pick WinDirStat because it doesn’t require any additional software to operate. Thanks for reading.